The enormous sacrifices our Veterans and their families make was honored during Mayor Robert Hudak’s keynote address. The Mayor also highlighted the bravery of our Veterans and their willingness to stand up for their country during trying times. “In a world where we hear a lot of talk, our Veterans took action,” Mayor Hudak said. “Now, it’s our duty to ensure our Veterans receive the support and care they need. We must do our part for our Veterans. Let us do something every day to thank them.” 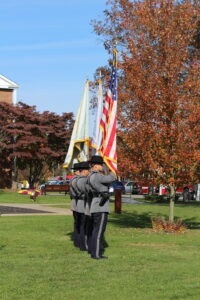 It was a moving morning of remembrances featuring performances from Cassidy Gobel, singing the “National Anthem” and “America the Beautiful.” Bagpiper John Giblin provided music as the Manchester Township Police Honor Guard performed the Presentation of Colors.

On behalf of Mayor Hudak and the Township Council, thank you to everyone who attended and participated in creating such a memorable ceremony honoring our Veterans. This annual tradition holds significant meaning to all of our local Veterans, as well as our Manchester community that gathers to honor their service.