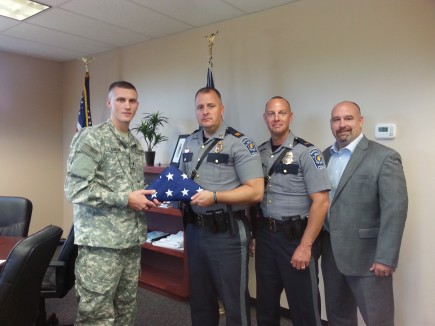 The Manchester Township Police and Mayor Kenneth Palmer were honored to accept an American Flag presented by United States Army Spc. Robert Korzon, a Toms River resident proudly serving his country. The flag was flown over Guantanamo Bay Naval Base in Cuba, where Spc. Korzon serves with the Military Police in support of Operation Enduring Freedom. Flown for 9 minutes, 11 seconds, the flag is a symbolic remembrance of the Sept. 11 terrorist attacks. Mayor Palmer was joined by Capt. Todd Malland and Lt. James Sharkey on Sept. 23, 2015, to greet Spc. Korzon in his office and accept the gift.

“I am extremely honored that in the midst of serving our country in Operation Enduring Freedom, Spc. Korzon felt compelled to present the Manchester Township Police Department with an American Flag that flew over our base in Guantanamo Bay because our Police Department far exceeds the benchmark of excellence,” said Mayor Palmer. “Spc. Korzon makes me proud to be an American and our police make me proud to live in Manchester Township.”