The Manchester Township Council is ready for a productive year in 2020, having reorganized during their January 2, 2020, meeting in the Municipal Complex Courtroom.

Congratulations to Councilman Robert Hudak, who took his Oath of Office during the meeting. Appointed to the Council in June of 2019, Mr. Hudak, filled the seat vacated by Charles Frattini and won his election bid this past November. Following the administering of his oath, Councilman Sam Fusaro was elected to lead as Council President and Councilman James A. Vaccaro, Sr., was elected Vice President. 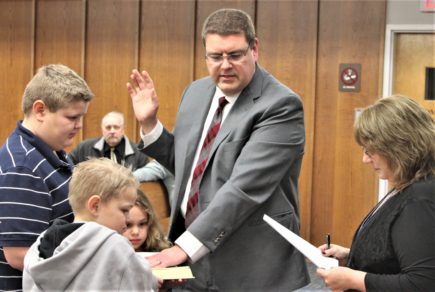 In public remarks, Council President Fusaro noted that it has been 30 years since Manchester Township residents voted to change to a non-partisan form of government following a corruption scandal. He said that it was the diligence of residents who held their officials accountable and participated in their local government that helped the Township recover from near bankruptcy.

“I want the new residents, and not just the older ones, to get involved in Manchester Township,” Mr. Fusaro said, encouraging everyone to attend meetings and ask questions. Transparency, he said, continues to be paramount throughout all of the offices in Manchester Township’s Municipal Complex.

Ken Palmer, Mayor of Manchester also spoke, addressing some of his goals for the near year, which include implementing the township-run EMS service within the next few months, improving water service through the construction of a new tower and interconnection with Lakehurst Borough, completing the town-wide reassessment, and using a recently-awarded grant to cap the Whiting landfill and construct solar panels on the land.

Both Council President Fusaro and Mayor Palmer thanked Manchester Township’s employees for their continued hard work throughout the year. “Our employees are the best of any municipality. In the 25 years since I’ve done this, this group is the easiest and best to work with,” Mr. Fusaro said. 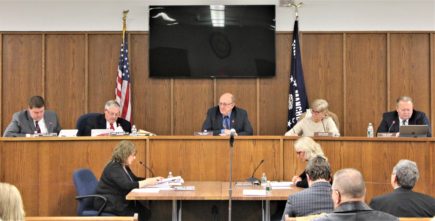 Other items at the Reorganization Meeting included the appointment of Manchester Township’s professional services and establishment of meeting dates for 2020. Information about Manchester’s Township Council, its members, meeting agendas, and minutes can be found at www.ManchesterTwp.com/town-council.