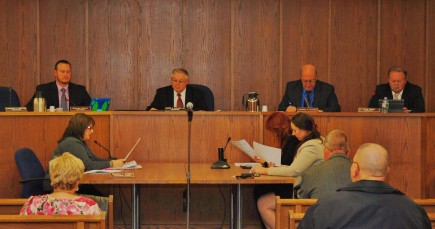 Manchester Township Council member James A. Vaccaro, serving since 2012, was selected to lead as Council President in 2016 at the annual Reorganization Meeting held on Monday, January 4.

Mr. Vaccaro, who served as Council Vice President in 2015, succeeds Brendan Weiner, who was elected in 2006, as President. Mr. Vaccaro outlined his vision for 2016 and beyond in remarks given at the meeting.

“This Council is committed to keeping Manchester Township an attractive place in which to reside and making Manchester Township more affordable for its residents,” he said. That includes exploring revenue enhancement projects, increasing tax ratables through controlled development, attracting commercial ratables, encouraging local business growth and exploring and evaluating the redevelopment options of the Heritage Minerals Site.

For 2016, Mr. Vaccaro and the Council will focus their efforts on implementing a No-Knock Policy, Foreclosure Program, and will explore the feasibility of an in-house grant writer and alternative energy sources. He also pledged to continue to work closely with Mayor Kenneth Palmer, now in his second year as Mayor, to make Manchester a better place for all residents and businesses.

Serving as Council Vice President in 2016 is Samuel F. Fusaro, who noted that this was his 21st Reorganization Meeting. Mr. Fusaro was part of the transition when Manchester Township changed to a nonpartisan form of government in 1990. Though he had left the Council for a period of time, Mr. Fusaro returned in 2011.

“I think this is a great Council. We don’t always agree, but we reach the decisions that are in the best interest of Manchester Township and its residents,” Mr. Fusaro said.

The composition of the Council remains the same as last year, as no seats were up for election in 2015. Serving on the Council in 2016 are: President James A. Vaccaro, Vice President Samuel F. Fusaro, Craig Wallis, Brendan Weiner, and Charles L. Frattini. Other items at the Reorganization Meeting included the appointment of Manchester Township’s professional services and establishment of meeting dates for 2016.

Information about Manchester’s Township Council, its members, meeting agendas, and minutes can be found at www.ManchesterTwp.com/town-council.