The outstanding work of Manchester Township’s municipal employees was celebrated during the 2016 Holiday Party and Employee Recognition Awards, hosted last week by Mayor Kenneth Palmer and the Township Council.

Mayor Palmer, Business Administrator Donna Markulic and Personnel Officer James Gant presented the awards during the luncheon event. All employees had been asked to nominate their peers for their exceptional efforts, and from those nominations a committee selected this year’s award recipients. 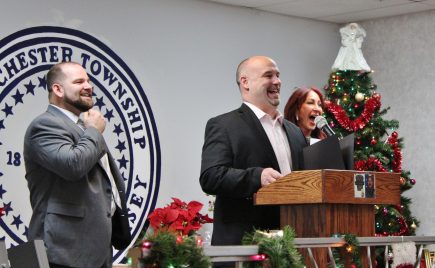 “Even before I became Mayor, I’ve always maintained that Manchester Township is one of the best places to live and visit and that is because of the hard work and effort our dedicated employees put forth each day,” said Mayor Palmer.

The award recipients for 2016 were as follows:

Fred is receiving this year’s Exceptional Service Award for his continued role as the Commercial Driver’s License instructor for the Township. Fred has effectively trained multiple new employees who are required to meet the CDL qualification within the first 90 days of their employment.

Erica continues to be an employee who provides the best service on a daily basis. Compliments are constantly being received regarding Erica’s demeanor and professional nature. Erica maintains a courteous and service conscious rapport with multiple vendors, builders, homeowners, taxpayers and prospective employees.

The staff of the Clerk’s Office has spearheaded the adoption of a needy family for Christmas. This includes emails, collecting donations, shopping and wrapping gifts for a needy family this holiday season. 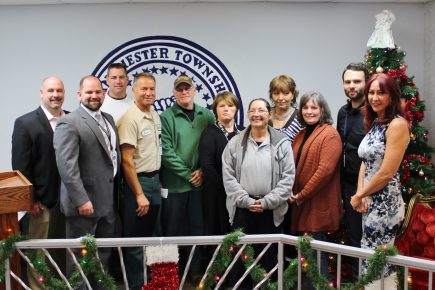 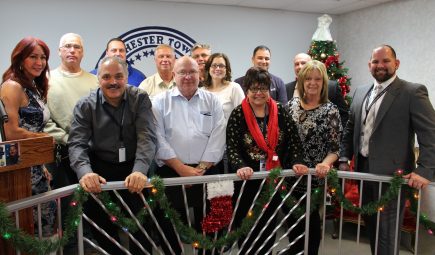 This exceptional service award is being presented to both Ginny Muscarella and Vinny Taliercio for going above and beyond to assist an individual residing in the woods, ending with finding him permanent housing.

Brenda worked tirelessly to assist a 46-year-old woman with disabilities after her father and caregiver passed away. Brenda was able to secure housing, social security disability compensation, general assistance, food stamps and helped the woman to straighten out her finances.

Marisa continually goes above and beyond with regard to the Shop Manchester program. Marisa maintains a constant dialogue with the merchants, often stopping by after work to drop off cards and or answer questions.

Under the supervision of Lt. Jim Sharkey since 2015, Margaret has demonstrated extensive knowledge of all domestic animals and wildlife in our community. Margaret is known to be “fearless” when it comes to the performance of her duties and often times is called by Police Officers to secure an aggressive dog or wild animal.

Leslie Bankos, under the supervision of Lt. Jim Sharkey has been completing Firearms background checks since 2012. During this 4 year period the Police Department has seen major increases in the amount of applications, in addition they have gone through several improvements on how the applications are processed.

The Building Department has seen an influx in building and re-occupancy inspections. Marianne has been instrumental in the logging, scheduling and re-scheduling of over 10,000 inspections in order to serve our residents, homeowners, builders and contractors in a timely manner.

Greg consistently goes above and beyond in all of his assignments and regularly exceeds the expectations of a Confidential Aide to the Chief of Police.  In addition to his regular duties Greg routinely takes on additional work and is always willing to help others when the need arises.

Bob is responsible for maintaining the Township’s many signs including: street signs, stop signs, speed limit signs etc. Bob also makes many signs for vehicle fleet and various departments and completes these tasks in an extremely timely manner and with accuracy.

Ed continues to be an integral part of the Buildings and Grounds staff. Ed completes multiple tasks throughout the day and interacts with various departments with a positive attitude and professional demeanor while providing an exceptional work product.

Ron Rhein was hired on July 6, 2015 as the police records supervisor under the direct supervision of Lt. Vincent Manco. Ron was nominated for his superior performance at the discretion of the police command staff as they have been extremely impressed with the outstanding job he has done since his first day on the job.

Mike has consistently used his skills to go above and beyond his normal every day duties. His construction skills have greatly benefited the Township through the numerous office reconstruction and window replacement projects he has performed which have help save the Township tax dollars.