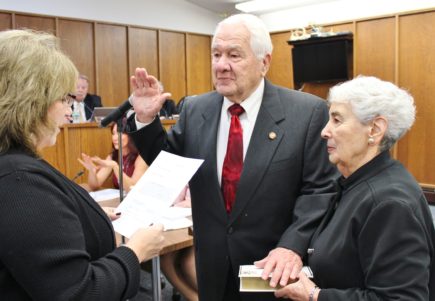 Mr. Frattini, a U.S. Marine Corps veteran and former photojournalist for the New York Daily News, retired to Manchester Township with his wife, Mary, in the late 1990s. In 2012, he ran a successful campaign for the Township Council under the Continued Good Government banner, pledging to keep “Manchester a great and safe community to live in” for both seniors and younger families. Mr. Frattini, a Leisure Village West resident, won reelection in 2016 and served as the Council’s liaison to the Senior Advisory Board.

In tendering his resignation, Mr. Frattini thanked his fellow Township Council members, Township Clerk staff, and Mayor Kenneth Palmer for the support they gave him during his tenure. “I am sure I will miss you all, and the work you do,” Mr. Frattini said.

“On behalf of Manchester Township’s government, employees, and residents, I would like to offer a sincere thank you to Councilman Frattini for his years of dedicated service to his community,” said Council President Joan Brush. “As a valued Council Member, Charles always worked for what was best for the residents of Manchester Township.”

Resumes are being accepted by the Manchester Township Council for the purpose of filling the vacancy created by Councilman Frattini’s resignation, for the un-expired term that ends on December 31, 2020. Interested candidates should note that they will be appointed to the position until December 31, 2019, but will be required to run in the November 5, 2019, general election to fulfill the remainder of the unexpired term. Interested residents should send their resume to Sabina T. Skibo, Township Clerk, 1 Colonial Drive, Manchester, NJ 08759, by May 17, 2019.

More information about Manchester’s Township Council, its members, meeting agendas, and minutes can be found online at www.ManchesterTwp.com/town-council.