Home/Around Town With Mayor Hudak/Chair of Honor
Previous Next 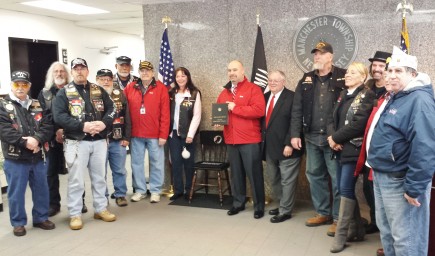 Rolling Thunder, an organization dedicated to educating the public about POW/MIA service members, joined with Manchester Township’s Veterans Committee to unveil a “Chair of Honor” in the Municipal Complex lobby on April 5th.

With 91,000 United States service members missing since World War I, the unveiling was about raising awareness, according to Rolling Thunder Vice President Charles Webster. “Today’s ceremony speaks for them,” he said. The Chair of Honor is a simple yet powerful reminder of the thousands of service members who remain unaccounted for.

Mayor Ken Palmer recognized that our Township has a substantial population of Veterans, which means this issue hits close to home for many. Our Township’s Veterans Advisory Committee actively finds ways to recognize and care for Manchester Township’s Veterans. “It’s a privilege for us to place this Chair of Honor in our Town Hall,” said Mayor Palmer.